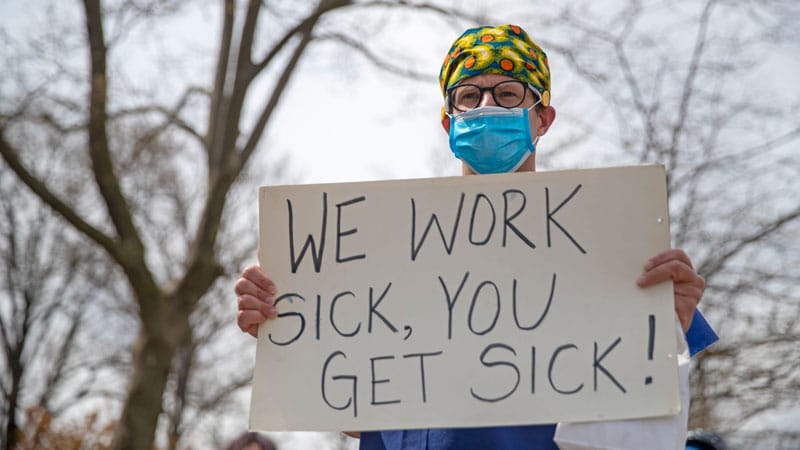 Last spring, when Cliff Willmeng, RN, was working at United Hospital in St. Paul, Minnesota, he’d take off his personal protective equipment (PPE) in the same hallway where children were transported from ambulances to the neighboring Children’s Hospital emergency department. Stretchers would roll across red tape on the floor that designated the area as a “hot zone.” The door from a break room was about 10 feet away.

Willmeng has been a union activist all his life, but he’d never filed a complaint with the Occupational Safety and Health Administration (OSHA) until the COVID-19 pandemic hit.

Concerned about the inadequate space for doffing PPE and other situations in which the spread SARS-CoV-2 seemed possible, Willmeng and other colleagues filed multiple OSHA complaints with the Minnesota Department of Labor in March and April. Willmeng was also worried about bringing SARS-CoV-2 on his scrubs home to his wife and kids, and he started wearing hospital-supplied scrubs that were meant for doctors and that were washed on site, which was against hospital policy. The hospital fired Willmeng on May 8, citing code of conduct and respectful workplace violations arising from the uniform dispute.

In August, the state agency issued Willmeng’s hospital a $2100 fine for failure to comply with guidance regarding “respiratory protection” in response to worker complaints over the fact that they were instructed to restaple elastic bands on N95 masks early in the pandemic. In a statement, United Hospital said it contested the citation, and it is in discussions with Minnesota OSHA. “We have and continue to instruct employees not to alter N95 respirators or reuse damaged or soiled N95 respirators,” such as when the straps are broken, the statement says.

Minnesota OSHA has received three times as many emails and phone calls from workers and employers requesting information and assistance during the pandemic compared to last year, said spokesperson James Honerman. “If Minnesota OSHA is made aware of a workplace safety or health issue, it assesses the situation and determines how best to respond, including conducting a workplace investigation.”

But Willmeng, who has been out of work since he was fired, says that without a receipt or confirmation from OSHA, he has no way of knowing whether there has been any follow-up regarding his complaints. Minnesota OSHA said workers should receive a letter once a case is resolved.

Like Willmeng’s case, none of the more than 10,000 COVID-related complaints the federal OSHA office has received from across the country have resulted in meaningful sanctions. Unions have picketed local OSHA offices and publicized complaints on behalf of their members to protest what they see as a lack of oversight. Legislators have called on US Department of Labor Secretary Eugene Scalia to step up enforcement.

Former government officials writing in The Journal of the American Medical Association were similarly critical: “In the face of the greatest worker health crisis in recent history, OSHA, the lead government agency responsible for worker health and safety, has not fulfilled its responsibilities.”

What Could Have Been

There were early signs that the agency wouldn’t be heavy-handed about COVID-19 safety concerns, Brudney said.

The agency could have issued Emergency Temporary Standards, rules it can put in place during pandemics that address specific short-term concerns. These rules could have required employers to take infection-control measures to protect workers, including mask wearing, providing proper PPE, and screening for COVID-19 symptoms. “That’s what the agency is supposed to do. They’re supposed to respond to an emergency with emergency measures,” Brudney said.

But despite legislative pressure and a court case, Secretary of Labor Eugene Scalia has declined to do so, saying that the agency would instead rely on its regular general duty clause, which is always in place to keep workplaces free from hazards that “cause death or serious physical harm.” The agency invoked the general duty clause for COVID-19–related violations for the first time in September to levy modest fines.

In response to a request for an interview, a Department of Labor spokesperson said that preexisting OSHA requirements apply to workers during the pandemic, including providing PPE for workers and assessing sanitation and cleanliness standards. The agency has issued specific guidance to companies on pandemic preparedness, she said, and that it responds to all complaints. Additionally, she cited whistle-blower laws that make it illegal for employers to retaliate against employees for making safety and health complaints.

The federal OSHA office received 10,868 COVID-related complaints from February 1 through October 20, citing issues ranging from failure to provide proper PPE to not informing workers about exposures. As of October 22, 2349 of the complaints involved healthcare workers. This count doesn’t include the untold number of “informal” complaints handled by state OSHA offices.

In a recent JAMA opinion piece, two former government officials agreed that “the federal government has not fully utilized OSHA’s public safety authority” and called the issuing of an Emergency Temporary Standard that would require employers to develop and implement infection control plans “the most important action the federal government could take” to protect workers.

“Employers are more likely to implement these controls if they are mandated by a government agency that has adequate enforcement tools to ensure compliance,” wrote former Assistant Secretary of Labor David Michaels, PhD, MPH, now at the Milken Institute School of Public Health of the George Washington University, Washington, DC, and Gregory Wagner, MD, a former senior advisor at the National Institute for Occupational Safety and Health at the Centers for Disease Control and Prevention, now at the Harvard T. H. Chan School of Public Health, Boston, Massachusetts.

They cited the success of a standard that OSHA issued in 1991 in response to the HIV/AIDS crisis. “The bloodborne pathogens standard has contributed to a substantial decline in health care worker risk for bloodborne diseases like HIV and hepatitis B and C,” they wrote. In a new report for the Century Foundation, the pair offers recommendations to the federal government for controlling the spread of the disease by ramping up OSHA’s role.

OSHA did issue a response plan that requires employers to report in regard to employees who experienced workplace exposures to SARS-CoV-2 and who were hospitalized with COVID-19 or died of the disease within certain time frames, but recent changes to these rules make experts question whether companies are in fact required to report hospitalizations.

The agency subsequently dropped the first citation it had issued for a COVID-related violation, even though the company, a nursing home, had already agreed to pay $3904 for reporting employee hospitalizations late.

“It’s a step backwards from an important workplace and public health function that OSHA should be doing,” said Wagner, coauthor of the JAMA opinion piece.

The agency could also charge much more substantial fines for the citations it has issued. If a medical facility was cited for a PPE violation, such as the Minnesota hospital where workers were told to restaple the elastic bands on N95s, the agency could have cited the hospital for one violation per employee. Such fines based on multiple violations could add up to the hundreds of thousands to millions of dollars.

“It would send a signal to the highest-risk employers that these are violations that need to be addressed immediately,” Brudney said.

Many of the 22 state OSHA offices appear to be more responsive to COVID-related complaints than the federal agency, creating a system in which healthcare workers have substantially different rights from one state to the next. The governor of California, for example, recently authorized California’s OSHA division to consider COVID-19 an imminent hazard, to prohibit workers from entering areas where the hazard exists, and to require employers to disclose exposures. The state also recently issued large fines for COVID safety issues: $222,075 to frozen food manufacturer Overhill Farms, and $214,080 to employment agency, Jobsource North America.

Elsewhere, state laws such as New Jersey’s Conscientious Employee Protection Act give workers the right to refuse to work in unsafe situations, Brudney said. “A lot more action is going on at the state level because so little is being done at the federal level,” he said. “Some of it is governors committed to protecting essential workers and their families.”

Unions are both decrying the lack of enforcement thus far and seeking more oversight going forward.

In August, the National Nurses’ United (NNU) union filed a complaint to implore OSHA to investigate the country’s biggest hospital systems, HCA Healthcare, which operates 184 hospitals and about 2000 other care sites in 21 states and the United Kingdom. The uniion describes how, throughout HCA hospitals, there is an environment conducive to the spread of coronavirus. Nurses share space and equipment, such as computers, desks, phones, bathrooms, and break rooms, where staff take off masks to eat and drink. The complaint also describes how there is resistance to testing nurses and a lack of communication about infections among colleagues.

“When they have total disregard for safety, they should be punished to the utmost,” said Markowitz, noting that HCA Healthcare is worth $40 billion. “They can penalize them, but if it’s unsafe conditions for RNs and healthcare workers, we know it’s unsafe for the patients. There needs to be drastic measures to prevent hospital corporations from behaving that way.”

In a statement, HCA spokesman Harlow Sumerford said the company has followed CDC guidance for protecting frontline caregivers. “We’re proud of our response and the significant resources we’ve deployed to help protect our colleagues. Meanwhile, the NNU has chosen to use this pandemic as an opportunity to gain publicity by attacking hospitals across the country,” Sumerford said.

Members of the union recently protested in front of the federal OSHA offices in Denver, Colorado.

After several months, OSHA finally penalized a meat packing plant where eight workers (six union members) had died of COVID-19 last spring. But the amount ― $15,615 ― was so low that Cordova worries it will actually have a worse impact than no fine.

“It’s more dangerous to workers because now employers know [they won’t be punished meaningfully],” she said. “During the pandemic, OSHA has been absolutely absent.”

Thus, the recent picketing outside the offices in Denver. But, Cordova noted, it’s unlikely OSHA employees saw them. Their own offices were deemed too risky to stay open during the pandemic. They were vacant.

Sheila Eldred is a freelance health journalist in Minneapolis. Find her on Twitter @MilepostMedia.

Do you have information on how your hospital or health network is responding to PPE shortages, gag orders, or other related issues? Has anyone you know faced disciplinary measures for speaking out? Write to us: news@medscape.net.